Food Allergies Can Be Eliminated 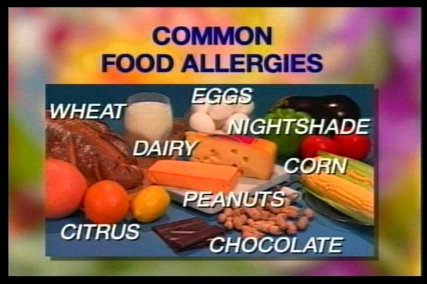 f you’re feeling tired sluggish and bloated after eating maybe you have  a food allergy. If you’re wondering whether or not you have food allergies, ask yourself after you eat do I have more energy or less? If you have less, you’ll learn some helpful hints in this article about what allergies are, which foods people are most commonly allergic to the most common food allergy symtoms and allergy tests and most importantly how to fix food allergies.

Twelve years ago I was allergic to wheat, dairy, eggs and peanuts.  After eating them I’d feel tired, bloated and depressed.  But I thought that’s how you’re supposed to feel after you eating.  I didn’t know any different.  Then one day I went to a doctor in San Diego and he gave me a chiropractic Allergy Correction Technique treatment.  After one treatment, I went out and had an egg salad sandwich on whole wheat bread and a peanut candy for dessert and had absolutely no reaction whatsoever.

Allergies are generally thought to be a malfunction of the immune system.  The body reacts to a substance which is normally harmless to the majority of the population. According to my clinical experience, I have found this to be only half true.

Food allergies have a lot to do with craving.  If you crave a food and eat it all the time, you may be allergic to it. There’s a substance in the brain called enkephalin.  It’s like a narcotic. When it gets released it sets up an addiction and strangely enough, we crave the foods we’re most allergic to.  This causes various digestive tract symptoms such as bloating, gas, various aches and pains.  If you’re bloated and have gas all the time after eating, there’s a good chance you’re allergic to one food or another.  You’re supposed to have more energy after eating, not less.  If you feel tired after eating, it’s an indication of a possible food allergy.  After avoiding food allergens, many people lose weight without any reduction in caloric intake.  That’s because of excessive water weight gain due to a reaction to food allergies. The most common food allergies are wheat, dairy, the nightshade family, citrus, chocolate, eggs, corn and peanuts.

Women tend to crave chocolate, pastries, yogurt and coffee.  Men tend to crave cheese, beer and beef. Foods that you crave tend to be the worst ones to eat, just like a heroin addict craves heroin, junk food junkies crave junk food.  Chocolate cravings may be due to a magnesium deficiency. While a craving for beer may be from a yeast allergy.  Cravings are the strongest indicator of allergic food reactions.  Allergy symptoms may include hyperactivity in children, migraine headaches, arthritis and asthma.  Children also may have puffy eyes, congested sinuses and acne.

Learning disabilities in children or lack of coordination may also be seen. These can all be caused by allergies and are often treated by the preservative free Finegold Diet.

The traditional medical treatment for allergies is an allergy shot, injecting small doses of the allergen and gradually increasing the dosage to produce an acquired immunity. These are like vaccinations. They are often painful, and often very expensive. They work only a third of the time and there is a possibility of an accidental overdose causing anaphylactic shock, possible kidney failure or even death. It’s just sweeping it under the rug. It’s not really dealing with the problem. It’s only giving symptomatic relief, hiding the real cause which is dangerous because more serious problems may develop later. By contrast the Allergy Correction Technique eliminates the organ and energy imbalances. This completely eliminates the root cause of the problem.

The first step is to identify the specific allergies.  There are many different allergy tests.  They include the RAAST Radio Allergo Absorbent Test. This test picks up food allergies but it misses the chemical hypersensitivities. Another test is the cytotoxic test. That’s a food test where a blood sample is taken and then different foods are tested in it. Various reactions are seen that way. It’s not very accurate though or very reliable, and it costs between $200 and $300.

Then there’s Applied Kinesiology.  We can test which foods you’re allergic to by a muscle response test.  I have found this method to be both quick, reliable and inexpensive.  After doing this test in my office and finding out which foods you’re allergic I will ask you to avoid these foods for at least 2 weeks. Then we do what’s called a provocative test where you eat the offending foods one at a time to see if you still get a reaction after receiving the Allergy Correction Technique treatment.

I’ve developed and used the Allergy Correction Technique for several years now. It has allowed me to help my patients to achieve a better life without the use of prescription drugs. If you think that you may be suffering from food allergies please call me for a free consultation at 510-558-0164 or e-mail me at drrettner@sbcglobal.net I would love a chance to relieve your symptoms and help you to achieve a happier, healthier life style. Thank you.